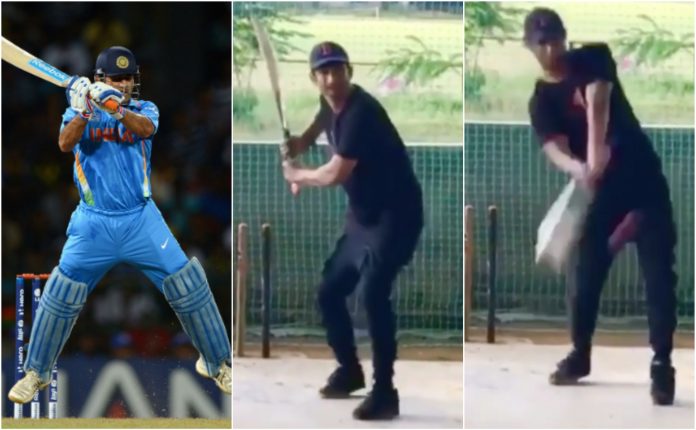 Almost a month after the untimely death of Bollywood actor Sushant Singh Rajput – who died of suicide sending the whole nation into utter shock and mourning – a rare video of the actor is going viral on social media.

Sushant – who received a lot of praise for his role in MS Dhoni’s biopic – is seen practising the signature shot of the former India skipper – the helicopter shot. His stellar performance in the movie made him a big star.

Not only does he nail the shot, but also receives a lot of praise as fans cheering in the background can be heard. The video is already being loved by fans.

Here is the much-talked-about clip:

Meanwhile, a lot of big directors and people associated with the late actor have been quizzed by the police.

On the other hand, MS Dhoni turned 39 on July 7 and hasn’t played professional cricket for nearly a year. His last match was against New Zealand in the 2019 World Cup semifinal.

However, Dhoni has no plans to retire according to his manager and childhood friend Mihir Diwakar.

“Being friends, we don’t talk about his cricket. But looking at him, he’s not all thinking about retirement.

“He is very determined to play the IPL. He has worked really hard for this. If you remember he was there in Chennai one month in advance before everything was shut down.

“He has maintained his fitness regimen at his farmhouse and will start practice after the lockdown is lifted. Everything now depends on how fast the situation returns to normalcy.”

Also read: MS Dhoni What Has The Former India Skipper Been Doing Since Taking Sabbatical?