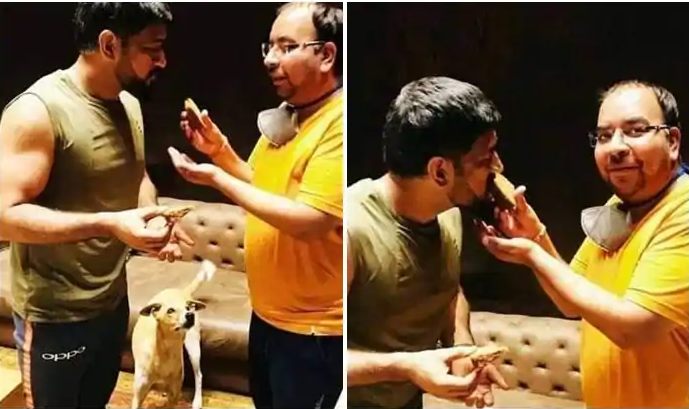 Arguably the most popular man in cricket, despite having not played a single international match for over a year – former India skipper MS Dhoni turned 39 on July 7 and expected there was a huge buzz on social media. But, there were hardly any images or videos of the man that surfaced on the social space. Now, there are images that give us a glimpse of how Dhoni – lovingly called ‘Mahi’ celebrated his birthday.

It was a hush-hush affair as expected. In the pictures that have surfaced on the internet, it can be seen that one of his friends is putting a piece of cake inside his mouth with his pet in the backdrop and it makes for an adorable moment and we are certain will be loved by fans.

Wishes from his Teammates:

From Virat Kohli to Suresh Raina, most Indian cricketers wished him on his big day. India allrounder Hardik Pandya and his brother Krunal also reached Ranchi to surprise Dhoni and make his birthday special.

Meanwhile, amid all the speculations of his retirement, his manager Mihir Diwakar has confirmed that the Ranchi-born is not considering it as of now and he also said that he is determined to play the cash-rich Indian Premier League, which has been suspended due to the coronavirus pandemic.

“Being friends, we don’t talk about his cricket. But looking at him, he’s not all thinking about retirement,” Diwakar was quoted as saying by PTI.

On Monday, just a few hours before MS Dhoni turned 39, Bravo released the ‘Number 7’ song in which he highlights the achievements of the former India captain. The Bravo Dhoni song is a tribute to the legendary MS Dhoni for his contribution to the Indian cricket and CSK. Bravo also mentioned Sourav Ganguly, the current BCCI President and former India captain, in his song. It was Sourav Ganguly who gave MS Dhoni his biggest break by pushing him up the order to No.3 in a 2005 ODI against Pakistan in Vizag, in which he went to score 148, which was his first ODI hundred.

1hr to go!! Look out for full vid .. the helicopter 🚁 about to take off for my brother birthday @msdhoni pic.twitter.com/9SF1EDSP7s

Also read: MS Dhoni is Full of Surprises Like His Captaincy: Sourav Ganguly on MSD’s Gesture in Retirement Game